Make A Gift From Your IRA 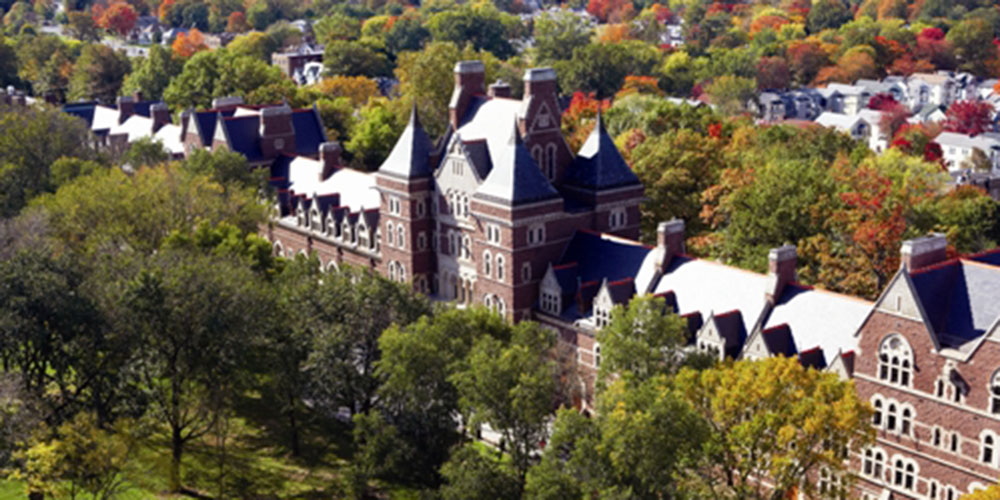 Both our donors and the beneficiaries of their generosity have stories to share.

Read their stories below:

When John Densem ’62 celebrates his 60th Reunion next year, he’ll visit the Trinity Chapel. And while the historic building hasn’t changed over the years, his view of it certainly has.
Learn more »

Long hours of conversation over dinner at Mather Hall were some of Elaine Patterson’s most cherished memories during her time at Trinity. “There’s no doubt those conversations helped me figure out who I wanted to be, what I wanted to do, where I wanted to go and gave me the emotional support I needed to keep moving forward.”
Learn more »

On a rainy day in the spring of 1991, prospective student Mary Beth Jordan ’95 felt right at home on a campus tour. Now on the cusp of her 25th Reunion, Mary Beth reflects back on her time as a student. She treasured the small classes at Trinity, and relished both the quality and balance of her education. “Trinity still is important to me 25 years later. I’m grateful for all that I learned and the friendships formed there.”
Learn more »

In honor of his 50th Reunion, John Rice ’69 knew he wanted to make a gift that celebrated the success of Trinity Football and the leadership of Coach Jeff Devanney ’93. To make his impact, Rice set-up a charitable gift annuity by transferring highly appreciated securities, to be designated to the football endowment. In return, he received an immediate tax deduction and will enjoy quarterly fixed payments from the annuity for the rest of his life.
Learn more »

Fifty years after graduating from Trinity, Tom Tonoli ’69 and his wife Jean are enjoying retirement in Fort Collins, Colorado, a place they have called home for several decades. “The good standards and thoughtful perspectives of Trinity professors helped shape attitudes and abilities that served me well in my public education career,” Tom fondly recalls. “Habits of study and preparation, necessary at Trinity, were part of the value I received.
Learn more »

Robert Joseph Roxby ’62, professor, dean, world traveler, and musician, exemplified the promise of his Trinity education, one that encouraged intellectual, artistic and spiritual pursuits, and lifelong learning. A man who knew no strangers, his generous bequest will help to ensure that the Trinity College Chapel – and the breadth of programs housed within its walls – will greet students and alumni for generations to come.
Learn more »

“Coming from a small middle class high school, Trinity was quite an eye-opener. Everything about it was different,” recalls Larry Roberts, ’68. These differenceswere exciting but intimidating. “Trinity provided structure,support and inspiration and over time I realized that I could hold my own, even excel in all aspects of college life – social, academic, athletics.”
Learn more »

“The amount I owed after graduation was small, interest-free, and easily retired. My real debt was to Trinity, which provided me the opportunity to complete my studies. We wanted to pay back that debt.” Tom and Pat have several charitable gift annuities with Trinity
Learn more »

“There are few times in our lives when we have the opportunity to have an impact on society and also recognize those who have helped educate us.” For D. David Dershaw ’70, that chance came as he planned his estate. Dr. Dershaw has established The Lucille and Samuel Dershaw Scholarship Fund in honor of his parents, to benefit future Trinity students with demonstrated financial need and demonstrated scholastic excellence.
Learn more »

Jan Gimar ’73 recalls the Open Semester program as one of the opportunities that led him to apply to Trinity.
Learn more »

Raised in Columbus, Ohio, Bob Ebinger always wanted to head east for college. Once on campus, he didn’t waste any time getting involved in all aspects of Trinity life.
Learn more »

Brooks Barhydt '08 and his dad, Dutch Barhydt '81, M'04, P'08, say there's no doubt that family tradition influenced each of them in their decisions to attend Trinity.
Learn more »

Penny Sanchez '77 cares deeply about Trinity and about communities. As a political science major, she served as a resident assistant, participated in Big Brothers Big Sisters, played on the women's varsity basketball team, and won the Samuel Fishzohn Award for her service to the community.
Learn more »

As the former vice president and treasurer of Trinity College, Bob Pedemonti '60, MA'71 was especially interested in how a life-income gift could be beneficial to Trinity and to himself.
Learn more »

Since her undergraduate days as a math major, Harriet Smith '77 has participated in the life of the College far beyond the classroom. A devoted member of the Trinity community, she has served in the Admissions Office, volunteered as a class agent, and led by example as an alumni trustee and Long Walk Societies Committee member. Through her involvement, Harriet has consistently sought to have a positive impact on the lives of Trinity students.
Learn more »

Seven generations of Peter Flagg Maxson's ancestors peer down from portraits in his Austin, Texas, home. Two of those faces were partially responsible for his decision to leave Texas for an undergraduate experience 'neath the elms in 1965: his great-great-grandfather Jared Flagg, Class of 1848, and grandfather Harry Maxson, Class of 1909.
Learn more »

Roger Hall '50 has long been a supporter of Trinity College. As a student he was a member of Delta Kappa Epsilon, Medusa (senior honor society) and the student senate. In 1949 he served as captain of the varsity football team and received the prestigious 1935 Award, recognizing him as the player of greatest value to his team, which was undefeated that season.
Learn more »

Professor Emeritus Albert Gastmann retired in 1990 after 36 years of teaching political science at Trinity. His dedication to Trinity and its students will live on in perpetuity because he directed that the majority of his estate—a bequest that will exceed $2.5 million.
Learn more »